This article by Paddy Thompson was first published in Retrospect no.426 February 2020 and was reprinted in Local Reach June 2020 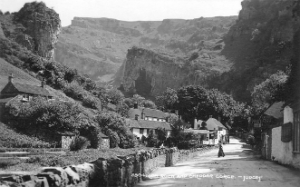 Sir – A short time since, being in the neighbourhood of Cheddar with some of my family, I availed myself of the opportunity of visiting the village, for the purpose of viewing the majestic and stupendous cliffs of which I had heard so much. On leaving the inn for this purpose, I had no sooner approached the object of my curiosity than I was surrounded by a tribe of vagrants, consisting of children and women, both young and old, each endeavouring by vociferation, not the most pleasing to the ear, to speak louder than her companions, and to give us a description of the rocks, calling them in a breath by a hundred different names, and each offering for sale specimens of ore and petrification, not one of which claimed a home at Cheddar. The garrulity of these importunate and wretched mendicants marred all our pleasure, and we turned back again to the inn, not a little rejoiced at being relieved from the incessant clamour of this motley group. In two of the caves in these rocks live two wretched old women. They are damp, miserable, hollow recesses, not fit for human habitations, and indeed it would be cruel to confine pigs therein. I hope for the credit of the village of Cheddar that these nuisances will be speedily abated, and that the admirers of Nature’s grand works may be suffered to indulge in their researches without being annoyed by scenes and conduct such as before described.

I am, Sir, your obedient Servant,

PS.  By the way, it will not be ill-timed to remind the Waywarden of Cheddar how desirable to travellers a few fingerposts would be in and about the roads leading from the Cliffs, and diverging from the main road.

* The discrepancy of year dates is in the original.