Shipham and Rowberrow
Two of the most wretched and depraved villages in the region.

This was the sort of description commonly used at the end of the 18th century.  In 1790 Hannah and Martha Moore visited Shipham and were horrified by what they saw:  half-naked children, wild men, and coarse foul-mouthed women whose homes were evil smelling hovels.  Martha wrote that “the people [were]savage and depraved almost beyond Cheddar, brutal in their natures, and ferocious in their manners.  ……. No constable would venture to arrest a Shipham man lest he should be concealed in one of their pits, and never heard of.” 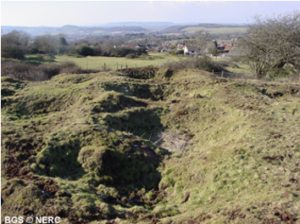 In the 18th century the villages were, almost exclusively, involved with the mining of calamine, a zine ore that was used to convert copper into brass and during the 18th century it became the most important industry on Mendip.  In 1791 Collinson wrote in his History of Somerset that there were over 100 mines in Shipham, many of which were “in the street, in the yards, and some in the very homes”.  The latter is explained by the fact that calamine was found near the surface and some miners simply hollowed out the earth inside their houses.  It was a relatively well paid occupation and Collinson estimated that “a miner with a proper assiduity may earn a guinea a day.”  This is equivalent today to about £80 and in 1790 was equal to a weeks wages for a skilled tradesman.  However the work was hard and the living conditions of the villagers were very poor.  Perhaps it’s not surprising that the miners were notorious for their rough manners and lawless behaviour.  Writing in 1915 Frances Knight says that it is not long ago “that there were villagers who, stripped to the waist, fought pitched battles with hostile villagers in the streets of Banwell.”

By the start of the nineteenth century, however, the industry was in decline.  New methods of producing brass and cheap imports from overseas meant that the calamine -brass industry was no longer economically viable.  In 1839, it was reported that only one or two mines were working and that, by 1853, all operations had ceased. Many of the miners left the area and In the 1860s and 1870s some of the Shipham miners were employed in the leadworks at Charterhouse.

As to the people themselves, I’m pleased to say that by 1915, with a much reduced population, Knight was able to write that “Shipham folk are as honest and kindly a race as one would find in any secluded west country hamlet.”