March meeting.
Chris Stephens gave an excellent talk on his research into the life of the Rev. Dr Thomas Whalley (1746-1828), which he sub-titled A True Story of Georgian Life at the time of Jane Austen. 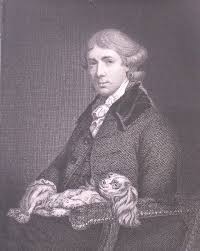 His interest in the subject was aroused when he was asked to re-build some walls that ran alongside Mendip Lodge, which was built by the Rev. Dr Whalley as a summer retreat.

Much of Whalley’s life is known from his letters edited and published by his great nephew in 1863, but recent research has revealed a far more interesting and complete account.  His life was clearly one of extravagance, generosity and intellectual activity and he spent much of his time with many of the most influential people of the time.

He was the son of John Whalley, Master of Peterhouse College in Cambridge and his mother was the daughter of the Chancellor of Wells Cathedral.  He married a widow, Elizabeth Sherwood, who was the heir to Langford Court and it was her money that enabled him to buy a house in the

Royal Crescent in Bath, which he used during the “season.”  Apparently he thought of himself as a poet and playwright and enjoyed living in Bath which was, at the time, a centre of social life and where there were many famous people such as Mrs Siddons, Hannah More, David Garrick and Mrs Thrale (Piozi). Chris used Whalley’s extensive correspondence with these people to inform his research.

Thomas and his wife went to France in 1783 ad let their house, Langford Court,  When they  returned in 1787 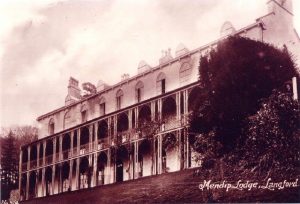 he built Mendip Lodge because Langford Court had been let you during their absence from England.  No expense was spared building the house and the cost of landscaping the grounds alone was, according to De Quincy, about £30,3000.  The equivalent to day of about 30 million,

In 1801 Thomas’s wife died and in 1803 he married a Miss Heathcote who was also very rich but sadly she died in 1807.  Although relatively wealthy, the upkeep of Mendip Lodge and his somewhat extravagant lifestyle meant that it made sense for Thomas to marry for a third time and in 1815 he married the widow of the wealthy General Horneck.  Unfortunately, as Thomas found out, Mrs Horneck herself was not well off, having been left out of the will of her late husband.  The marriage was not to last long and the couple separated in 1819. Quite what the reasons were for this are unclear but his wife’s accusation of cruelty led Thomas to seek a legal separation.

In 1819 he sold Mendip Lodge to Benjamin Somers, a relative by marriage of his first wife, but had to buy it back in 1822 when Somers failed to keep up the mortgage payments.

After his separation from his third wife, Thomas retired from public life in Bath and in 1820 was living in La Fleche, in France where his niece, Frances, and her husband lived.  Until his death Thomas seems to have divided his time between various places in Britain and in France.  He died in 1828 and was buried in La Fleche.

The Queen of Bath, Frances Sage

Thomas had a sister, Elizabeth, who he adored and who married an East India Company man called Isaac Sage.  When she died in 1778, she left a daughter Frances who was then 7 years old and since her father was in India, Thomas and his wife took care of her. Frances grew up to be a very accomplished and popular young lady and it is her who was to become the Queen of Bath.

was the self-appointed “Monarch of Bath” and logically he needed  “Queen.”  Various people held the post until, in 1788, aged 19 years,

Frances was hailed as the 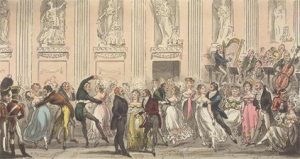 next Queen and stayed as such until 1790.  Why her tenure was so short is not known but Chris speculated that perhaps her behaviour had not been all that it should be!  She was described as spirited, independent and worldly.

In 1790 she married William Mullins, an Irish widower with 2 small children. However, although from a rich family and due to inherit a title and fortune, it seems that William had very little money and the couple had no settled home.  The marriage was clearly not a happy one and In 1795 Frances left William who divorced her on the grounds of infidelity.  She had, in fact, gone away with Captain Abel Rous Dottin, the eldest son of wealthy parents, who were plantation owners in Barbados.  It would appear that the two had known each other for many years and it is supposed that the whole “adultery” charge might have been staged. Whalley remained friends with William Mullins for many years and Dottin married 3 years after this event and became an MP with the help of Isaac Sage, France’s father.  A divorce was granted in 1796 and Frances received a settlement of £1000 per annum for life.

A mere three weeks after the divorce Frances married Rev. Robert Boyle Sullivan.  The suggestion is that France had fallen in love with him hence the staged adultery. Sullivan was a curate at Winscombe for a time but was removed for neglecting his duties.  Influential friends meant that he was able to obtain a curacy at Bradford on Avon.  In 1815 following the Battle of Waterloo, however, the Sullivans were in France. Although they appeared to live quite well it is unclear whether Robert had any employment or what exactly their financial situation was.  Frances did, of course, have her annuity.

In 1818, when her father died he left her only £1000 in his will, thinking that she was well provided for.  However in 1824 when her first husband died she lost her annuity and when Robert Sullivan died in 1826 Frances was in dire need of financial assistance.  She appealed for help to her uncle Thomas and he bought her a house in  in France and left her £1000 in his will.

Around 1830, with growing unrest in France, Frances sold the house and returned to England.  In 1841 she is recorded as residing in a lodging house (possibly her own) and in the 1851 census she is described as a an annuitant.

Chris ended with a question, which was whether Frances Sage and Thomas Whalley were known to Jane Austen.  He suggested that, as Austen knew Bath very well, that the families might have been known to each other and that Frances might well have been a source for some of her characters.  Chris surmised that one of the characters in  Lady Susan,Austen’s first book, written about 1794, was indeed modelled on Frances.

An intriguing thought to end with! 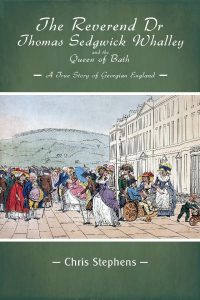 Chris has done an enormous amount of research in writing this book, which is available at a bargain price from the King John’s Hunting Lodge.