The February talk on The Severn Railway Disaster was given by Paul Barnett, a maritime historian and former Royal Marine. Paul became interested in the bridge disaster when he failed to find documentary evidence to support the stories about the event circulating in the area. The research that he undertook resulted in an exhibition in 2010 to mark the 50th anniversary of the disaster. It also led to the erection of two memorial stones on the banks of the Severn, one at Lydney Docks and one at Purton. 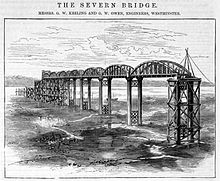 The bridge was constructed between 1875 and 1879 by the Severn Bridge Railway Company primarily to carry coal from the Forest of Dean to the docks at Sharpness, the Lydney docks being too small to cope with the growing volume of trade.  It continued in use for freight and some passenger services until 1960, the time of the disaster. It was designed by George Baker Keeling and constructed by Hamilston’s Windsor Ironworks Company Ltd of Garston, Liverpool. The bridge carried a single track railway and trains had to complete the return crossing from Sharpness to Lydney in reverse. It had been hoped that the line would attract tourist traffic as well as local passengers but seven years later the Severn tunnel was opened and, from early on, this threatened the bridge’s financial viability.

The bridge had twenty-three spans and over the years a number of vessels had collided with the piers as a result of the difficult conditions in the estuary. However, Paul wondered wryly whether the fact that the bridge wa
s covered by insurance could have had something to do with the number of collisions. The bridge was, after all, on the route of vessels heading for the breakers yard.

On 25th October 1960, two tanker barges, the Arkendale H and the Wastdale H collided in heavy fog near Sharpness. Both vessels had missed the entrance to Sharpness harbour and found themselves further upstream than they should have been. The result was that they had to battle against an incoming tide to regain the harbour entrance. The estuary narrows to the north of the harbour entrance and consequently the tide runs much faster at that point and has a back eddy. The skippers of the vessels lost control, their barges collided and as a result crashed broadside into pier 17 of the bridge. Part of the bridge collapsed hitting the barges. The Arkendale was carrying 191 tons of black oil, the Wastdale 252 tons of petrol. The result was a serious conflagration with five of the eight men on board the two vessels losing their lives. It could however have been even worse for, three days earlier, work had commenced on strengthening the bridge and, prior to the commencement of the programmed welding, the gas main which ran across the bridge had been disconnected. It was also fortunate that the six British Rail men employed to strengthen the bridge were off duty and busy listening to a boxing match at the time or they too could have been caught up in the disaster.

The accident left a 168ft gap in the 4,162ft. bridge and it remained in this state for seven years while decisions were made about whether to repair or demolish it. The decision had finally been made to go ahead with repairs when a capsized tanker caused further damage to pier 20 and the extra cost that this would have incurred made repair uneconomic.

The decision to demolish was taken and demolition was completed between 1967 and 1970. Today all that remains to be seen are several piers on the embankment and, at low water, the wreckage of the two barges which remain on the river bed.

The bridge had been of a box girder design with only one other, the Tay Bridge, being of a similar construction. This too had failed leading to the Tay Bridge disaster of 1879.

During the course of Paul’s investigations some fascinating memorabilia came to light. The first was a set of thirty-nine glass sepia photographic plates that had been taken by Keeling in the early days of the bridge’s construction and had been used by him to publicise the project and to raise sponsorship. They had been rescued from a skip by someone who was fortunate enough to be aware of their significance. Only one other set of plates is known to exist and this is in the possession of the Cardiff Institute of Engineering.

In spite of a having a long journey back to Gloucester, Paul stayed for refreshments and spent time enthusiastically talking to members and answering questions.