Extracts from the Taunton Courier (7 Jan 1920), suggest that New Years day was celebrated in Somerset with an exchange of gifts although “this custom is not so closely observed as in the past”.  The edition also mentions some curious customs associated with Somerset and New Years Day.   Apparently, you should “Never wash anything: if you do wash one of the family away” was an old saying and “trimming the nails is as much to be avoided on New Years day as it is of a Sunday of which the rhyme is often quoted “Cut ‘em on Sunday you cut ‘em for evil.  For the rest of the week you’ll be ruled by the Devil”.

Several rhymes about the weather were also quoted and apparently “The natives of Somerset always taught that the weather of the first three days of January ruled the coming three months.”  “In January should sun appear, March and April will pay full dear.”

One of the best-known customs associated with New Year is, of course, that of first footing in which “The first person that crosses the threshold on New Years day, if he be a dark man, brings luck.”  Although better known in the northern part of Britain it was apparently also a Somerset tradition.

In the 18th and 19th centuries, many people in Somerset actually celebrated Christmas on January 6th.   “Old Christmas” as it was called originated because, in 1752, legislation decreed that the calendar was changed from the Julian to the Gregorian calendar and, as a result, 11 days from 3 to 13 September disappeared and Christmas Day moved back from January 6th to 25th December.   In many, particularly rural areas, people protested at this “theft” of these eleven days and demanded that the government “Give us back our 11 days”.  It is strange to think that nothing whatsoever happened in British history for 11 days!

It was, apparently, “considered wicked by some Somerset folk to work on Old Christmas Day 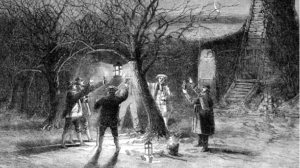 .!”   That said, they were not averse to having fun since wassailing traditionally took place on this day and the paper reports that “The custom of wassailing the apple trees is, perhaps, one of the best advertised Somerset and West of England customs — the whole world knows something about placing toast in the forks of apple trees and pouring some of the best cider about the roots to propitiate the fates and thus lead to a good apple bearing season.  Of course, there is singing …. and as the Wassail bowl circled around, the good old folk sang one or other of the wassail songs lustily enough to bring luck to both the trees, the owner and his wife and children [and] in some places guns were fired to ward off the evil spirits.”  The reason that many people now wassail on 17 January is, of course, because that was the Old Twelfth Night.

Whether you celebrate New Year or Old Christmas, I hope 2021 will be a good one.