From Rags to Riches:  Axbridge Workhouse.
Article written for Catch This magazine 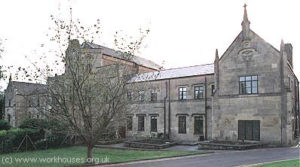 Looking at St John’s Court today it’s hard to believe that the building was once home to the poor and destitute of the parish.  Relief for the poor was
provided by their own parish until the 1834 Poor Law amendment Act set up a new system of Unions. Somerset was divided into 17 Unions of which Axbridge was one of the largest covering an area from Yatton down to Highbridge.  Axbridge itself was the centre of the Axbridge Union and the workhouse was built in 1836 using stone from the quarries at Shipham.  At that time the site was actually in the parish of Compton Bishop and was perhaps chosen so that it was out of sight of the Axbridge inhabitants whose town leaders Hannah More described as “a hard-hearted corporation given to fine clothes and luxury”.  That said, the person most responsible for setting up the workhouse was Richard Trew, the Mayor of Axbridge, who became the first Clerk to the Board of Guardians from 1836 until 1867.
For many people in the 19th century the living was precarious.  A bad harvest such as that in 1851 rendered many people destitute and their stay in the workhouse could be relatively short, lasting until the economy recovered.  It was also a temporary place for mothers expecting an illegitimate child but there were also long-stay residents with what we would now call mental health problems, as well as the blind and those with physical disabilities.  People undergoing family history research are often distressed to find that their relative died in the workhouse, but this could be misleading.  There were medical facilities at the workhouse and some people went there because they were seriously ill and, inevitably, some died.  They were not all poor and destitute.

Inmates were clothed and fed and were expected to work hard.  Men, for example, were engaged in stone cracking or oakum pulling and women were required to do laundry work.

The museum at the King John’s Hunting Lodge has an excellent display on the subject which is well worth a visit when it is open.