The first talk of the autumn was given on Wednesday 18thSeptember by David Bromwich. David, with his encyclopaedic knowledge of the SANHS collections, had put together a fascinating talk based on the illustrations of Somerset held in the Heritage Centre. He explained how, before the camera was invented and in common use, travellers had been in the habit of recording places of interest with sketches. He described how some, doubting their own skills in this direction, even employed professional artists. One such was the Reverend Richard Kay, Dean of Lincoln, who employed the artist Samuel Hieronymus Grimm to travel with him and to make an accurate record of his journey. In addition to this, some wealthy people commissioned art works for their own pleasure and built up what were to become famous collections.

Two of these were John Hugh Smith Pigott of Brockley Court, and George Weare Braikenridge of Broomwell House, Brislington. Between them all, they have left a remarkable legacy of drawings, lithographs, prints and watercolours of Somerset covering the period from the end of the eighteenth century through to the end of the nineteenth.

The record left includes some pictures of buildings that no longer exist, such as Holy Trinity, Bridgwater and Holy Trinity, Wellington where today only graveyards remain to show that the churches once existed. Many illustrations, however, record both the exteriors and interiors of churches as they were before the alterations of the Victorian Period. Others show us buildings still recognisable but in the process of change such as the one of St Mary Redcliffe, Bristol, before the spire was completed. In addition to churches, there were domestic scenes such as a cottage interior at Oare on Exmoor, and several of wider landscapes. A picture of Bedminster High Street drawn sometime in the 1820s or 30s looks almost medieval and is certainly unrecognisable to the casual eye today.

The Avon Gorge with Rownham Ferry in operation featured twice and although still easily recognisable shows the gorge before the Clifton Suspension Bridge was built and at a time when there was an ocean-going schooner navigating the gorge. Likewise, a picture of the Iron Bridge, Bridgwater, showed ocean going vessels on the downstream side of the bridge. Taunton featured twice with a picture of the Market House and Taunton Parade and another of the courtyard of Taunton Castle. David was able to point out the features of the courtyard that still exist today as well as those that are long gone. Closer to home, David showed us a wonderful picture of Cheddar Gorge by Samuel Jackson and was able to point out that the figures in the foreground were not of locals but had been taken from Pyne’s Microcosm, a book of foreground figures for artists.

Finally, David was able to indicate the value of the collections to the modern day by listing the large number of publications that have used them such as the Victoria County History and Somerset’s Millennium Book. 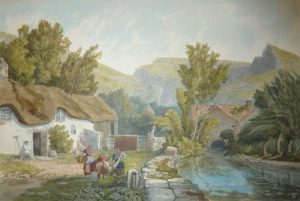