The last summer visit on July 9th was to the Banwell Bone Caves.

Starting with a lecture on the history of the caves, we were then gi 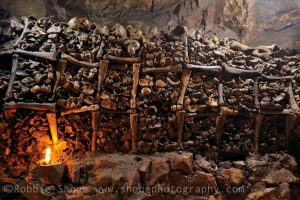 ven a guided tour of the cave where bones can still be seen. These Pleistocene animal bones were discovered in the early part of the 19th century on land owned by George Henry Law, the Bishop of Bath and Wells and, although many of them were removed, some  are still carefully stacked around the walls of the chamber.

At the time of their discovery there was great excitement as Bishop Law was convinced they provided evidence of Noah’s flood but it’s now agreed that they are of animals from the Ice Age thought to have fallen into the cave when the ice melted about 80,000 years ago. The bones are all of various animals similar to those that can be seen in the Arctic today including reindeer, bison, bear, and wolf.

Bishop Law employed William Beard to manage the caves and it was he who kept the caves open for several years after the death of Bishop Law.

We then walked around the grounds to see the Banwell Tower and the various follies which were built by Bishop Law and which have been carefully restored by the Banwell Caves Heritage Group which has worked hard to restore the site.
It is now classified as a Site of Special Scientific Interest (SSSI) and a Special Area of Conservation (SAC). .
The caves are not open to the public except by arrangement but well worth a visit.
Their website is banwellcaves.org.uk