Members of the AALHS will recall the talk on the Battle of Sedgemoor given in April by Johnny Torrens-Spence. As a follow-up to that talk, Johnny led a large group on a tour of sites associated with the movement of the rebel and royalist forces.

The tour began at St. Mary’s Church in Bridgwater where Johnny summarised the events that had led the Duke of Monmouth and his army to retreat to the town and risk a night attack on the royalist forces assembled at Westonzoyland.

The group then moved on to Parchey Bridge near Chedzoy where Johnny outlined the deployment and movement of the various cavalry and infantry units. Standing on the bank of the King’s Sedgemoor Drain, we were invited to visualise the confusion as bodies of troops sought to find their way at night across unfamiliar and treacherous terrain. Confusion over navigation and problems with communication, in short the fog of war, contributed to the eventual defeat of Monmouth’s forces.

At Parchey Bridge, the AALHS group was augmented by a herd of cows, anxious to hear Johnny’s account of the battle and keen to push their way to the front. Here, John Page (and his hat) displayed previously unappreciated stock handling skills.

Moving on to the battlefield site at Westonzoyland, the group heard about the bloody climax of the battle and its aftermath. Monmouth was executed and the sentences passed on the surviving rebels by Judge Jeffreys were swift and harsh. Executions or transportations were the order of the day.

The visit concluded with a walk to the battlefield memorial, with its moving dedication to “those who died doing right as they saw it.”

As ever, Johnny’s account was delivered with impressive clarity, knowledge and authority. His military background provided members and guests with clear insight into the strategic and tactical thinking of the commanders on both sides.

At the time of the visit, Westonzoyland church where some of the rebels were held prisoner, was closed for repairs. When it re-opens, members may wish to visit the informative exhibition there on the Monmouth Rebellion and its local context. 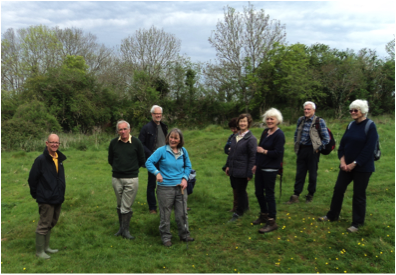 A number of AALHS members, including several new comers attending their first Society visit, congregated at the Star Inn to visit the hillfort. When the designated leader unexpectedly did not arrive Gill Davies, who knew the site well, stood up to the mark and led the walk around the site. She raised a lot of questions about how and why hillforts were built and encouraged people to investigate other hillforts in the area. It was a lovely walk. The site was full of wild flowers and abundant wild garlic and we had the added bonus that Gill was very knowledgeable about the wildlife. She also entertained Peter, the youngest member of the group at eight years old, by spotting a dormouse box and showing him how to make a spark by hitting flint on metal.