Who would have appreciated their dinner the most

Christmas Day at the Union Workhouse:  On Christmas Day the inmates of the workhouse received a substantial remembrance of the great Christmas festival.  Beef with vegetables and one pound of plum pudding, were distributed to each inmate.  The old women had also half-an-ounce of snuff each, and the children were regaled with sweets and fruit.  The workhouse pudding consisted of 280 lbs of flour, 125 lbs of raisins, 83 lbs of currants, 100 lbs of suet, 84 lbs of sugar, with other ingredients. 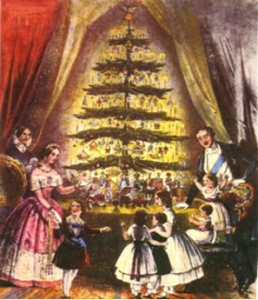 Windsor Castle:  The Christmas holidays were observed at court with princely festivity.  The royal table on Christmas night was laden with a magnificent display of viands, set out with taste and splendour.  The baron beef was there in all its glory, as well as the boar’s head, crested with bays and rosemary; and the sideboards were surmounted with stately Christmas trees, glittering with pendant bon bons.
From the Bristol Mercury 01 Jan 1848

In 1860 The Times reported that a favourite dish was a raised pie featuring a woodcock stuffed inside a pheasant inside a chicken inside a turkey and then baked in stuffing ad pastry.  So many mincemeat pies are to be baked the Castle cellars send up 24 bottles of brandy.  For the Christmas meal fifty turkeys are prepared.

Wells Journal
One of the prettiest of Christmas customs is the Norwegian practice of giving on Charismas day, a dinner for the birds.  On that morning, every gable, gateway or barn door is decorated with a sheaf of corn fixed on the top of a tall pole, where-from it is intended that the birds shall make their Christmas dinner.  Even peasants will contrive to have a handful set by for this purpose and what the birds do not eat on Christmas -day remains for them to finish at their leisure through the winter