According to newspaper reports farmhouse cheese had been made in Caerphilly since the 16th century.  This was made by traditional methods and eaten by the family and farm hands with any surplus being sold at market.  At some stage this production se 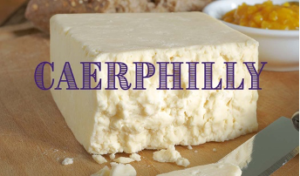 ems to have largely died out possibly because, with industrialisation, and particularly the development of the coal mines, many people left the land.   It is certainly true that by the late 19th century, a considerable amount of Caerphilly cheese was being produced in Somerset, Gloucester and even Glamorgan, much to the annoyance of Caerphilly residents.  It was quick to mature and was, therefore, a good cheese for people to make in their villages and it was clearly in great demand and therefore fetched a good price in south Wales.  It is said that it became a staple food for miners who used to take it down the mines wrapped in a cabbage leaf, and it was thought that it was a good source, not only of protein, but also helped to replace the salt and other minerals that they lost during their times underground.

Despite the concern about Caerphilly cheese being produced outside of the town, it was certainly still being produced until the second world war in various Somerset villages such as Allerton, Wedmore, Mark and Cheddar, sold at Highbridge market and then taken to be sold in South Wales. Recalling her life in Chapel Allerton, the late Mrs Sully said that “in summer cheese and butter were made every day up to the end of September. If we made Caerphilly it would go to Highbridge market.  In 1928, 9p per pound was a good price for the cheese.”

When the Milk Marketing Board was set up in 1933 much of this local cheese production stopped and in 1941 when cheese rationing was introduced, Caerphilly was one of the cheeses that were no longer made, apparently, causing outrage amongst the Welsh miners who were clearly a discerning lot.  In 1949 it was said that “there is a consistent demand for Caerphilly cheese.  The Welsh miner was not that disposed to processed cheese in his sandwiches.” (Western Daily Mail 30 Sept. 1949)