Seemed like a good idea at the time!
In last month’s edition I mentioned day trips to local places including Brean Down.  I wonder what that would be like now if this rather ambitions plan had been carried out.

In the middle of the 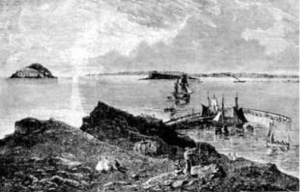 19th century discussions took place to build a harbour at Brean and in 1861 the Brean Down Harbour Company was set up with the backing of several eminent men and with substantial capital of £360,000.

It was thought that the port would be a valuable asset:  it could, for example, import coal from South Wales, a trade which had greatly increased with industrialisation and, more surprisingly, was the suggestion that the port could be used as a transatlantic route since it was nearer to New York than Liverpool!

The plan also included a link to the main railway line and an agreement was entered into with the Bristol and Exeter railway.  The foundation stone was laid in 1864 with many speeches, champagne and general excitement. Unfortunately, the ston
e was washed away that same night and seemed to foretell what was to come.  Although work was started, constant heavy storms continually destroyed much of the construction work.

Another attempt to revive the scheme was made in 1887 and the “New York Press” carried a long article about it entitled ‘Five Days to Sail to England’ and in 1889 there was a crowded meeting at Weston Assembly Rooms to consider further proposals fo
r the port.  One suggestion was to lay down a separate railway from the Down right into Weston Station and this was supported by the Great Western Railway. It was also thought that it would be a perfectly simple matter to construct a bridge over the River Axe and perhaps, one day, to have a tramway-line running right through from the harbour to Weston.

It was not to be. The capital proved hard to raise, and one by one the chief supporters of the scheme either withdrew or died. The extravagant dreams and ideas for the great Brean Down harbour scheme were lost for ever.