Richard Brunning gave an excellent and well-illustrated talk about the reconstructions both past and ongoing which his team have been doing at the Avalon Marshes Centre as part of a wider project, the Avalon Marshes Partnership, funded by the Lottery.

One of the first projects was to reconstruct wooden trackways at Shapwick Heath Nature Reserve.  The Sweet Trackhas been replicated on virtually the same line as it was originally was in about 3806BC and which probably lasted for about 9 years

What was interesting was that the first trackway that they made rotted fairly quickly and lasted for only about 3 years.  They also found that th 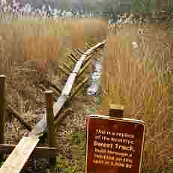 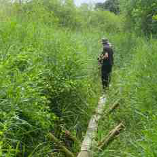 lly disappeared. Richard thought that this was, perhaps, why they were never used for very long.  The last version (left) which still stands has now been in place for about two and a half years.  Although looking very much like the original would have been, health and safety demands necessitated certain changes to its construction to make is safe, so the planks are kept secure with cross stakes.

The second reconstruction was of the Bronze Age Meare Heath Track, a two-plank walkway that was originally built across a wet bog but is now reconstructed in wet woodland on the nature reserve.
Large oak planks were laid on top of dumps of brushwood with transverse planks that operated like railway sleepers.As

Richard pointed out, the trackways were only ever used for foot traffic, not vehicles.

Richard went on to talk about dugout canoes one of which was found under the foundations of the Glastonbury Lake Villagein 1911.  The replica was made of beech and was fitted with a separate transom board at its wider end, like many prehistoric canoes.

The second one they made was an oak example similar to the Shapwick canoe now on display at the Museum of Somerset.  As an experiment it was fitted with an outrigger, which gave it much greater stability. The attachment was made using treenails at the ends, a feature found on the original.   They clearly had fun making these and trying them out but sadly the public can’t use them!

They have built three replica round houses, but the original one is no longer there.

Interestingly they found that they had originally got the design wrong, as they later found that the original builders had used very thin wall posts which were sunk only a short distance into the ground and that there was no dramatic edge between roof and wall.   They are now building a more accurate version using coppiced hazel which is wound around the posts rather like the construction of a basket. They hope to finish this in the next month or so.  They are also making various pieces of furniture and bits and pieces such as bowls and also a

ladder
based on archaeological evidence from the only original ladder that has been found in the UK.  Apparently  there are only 3 known examples in Europe simply because ladders don’t normally survive.  Richard assured us it works very well.  They are also making a bed for the inside of the house and since there is no evidence for Iron Age beds they have used their imagination and made up their own design complete with some typical carvings on the side.

Another reconstruction being done is of a dining room of a Roman Villa complete with hypocaust underfloor heating.  Terracotta tile pillars support the stone floor and hot air is fed from an external furnace and goes up through tubulae built into the walls andout through the roof which is covered with replica Roman roof tiles. The heating has been tested and apparently works well.

typical Roman fakery to make the building look posher that it is.  Inside the walls are plastered and are being painted in colours and styles known from the Roman period.  A typical Roman mosaic floor is also being laid.They have included many carvings and figurative images of deities such as Flora goddess of Spring (not margarine) and Bacchus god of wine and feasting, both based on early images from Italy, while Diana, goddess of the hunt, is based on a 4th century image from Rome. The overall result is incredibly colourful as you can see (above).

Anglo-Saxon Long Hall:   The design was based on Philip Roth’s notes on the excavations of the Anglo Saxon Long Hall at the Kings of Wessex Academy. The work is now nearing completion. The timber frame building is made of green oak. There are wattle and daub infill walls and split oak roof shingles. It stands over 5m in height with a smoke hood. Apparently, there is no archaeological evidence for this so it’s their own invention. There are carved barge boards and although it was not typical of the period they have put windows in the glass and have included some stained glass made by a volunteer.   The wattle and daub walls are lime washed and at one end they have made some plasterwork panels for wall paintings.  There is a raised dais at one end and they will probably make part of the building into a bedroom.  They are currently working on various pieces of furniture including some Viking inspired beds.

And finally, Richard spoke about The Walrus, a full-size replica of a Viking trading ship from Denmark. It now stands beside the Saxon Long Hal 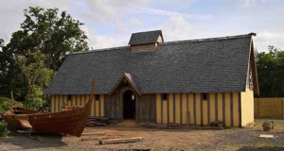 l.  When erected themast will be about the same height as the Long Hall.

A fascinating talk and a wonderful insight into how to use archaeological evidence and ancient techniques.