We had a very successful weekend of events with far more people attending than we expected.  As a result it was considered too hazardous to have a walk around the narrow streets of Axbridge and therefore on Saturday morning John Page gave a talk in the Square and a brief walk to look at some of the houses there. The afternoon saw us in the Church where Dr Jerry Sampson entertained us with an excellent talk about the building and its history and revealed a few of the little things you had never noticed such as a mason’s mark and the remains of coloured plaster work.

On Sunday afternoon two groups led by Madeleine and David Roberts went to consider Madeleine’s evidence for the existence of a port, walking from Axbridge along Bailiff’s wall down to Cradle Bridge on the River Axe and back along Hook wall to Axbridge.  Her theory that there was a port of Axbridge was both very interesting and intriguing.

The photo is of the two groups meeting on their way to and from the River Axe. 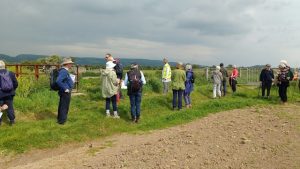