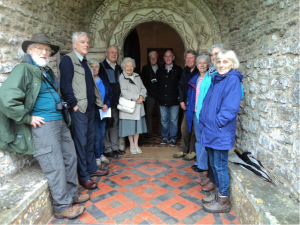 urday May 20th with a visit to Christon Church. Christon is a small village on the southern slope of Mendip and at the foot of Flagstaff Hill. It looks across the Lox-Yeo valley to Crook Peak and as people gathered many commented on the stunning setting and how tranquil and peaceful the valley must have been before the coming of the motorway.

The tour of the church of St. Mary the Virgin was led by the Reverend Ken Brown, former rector of the parish, who endeared himself to us early on by denying all responsibility for the wet weather with the observation that ‘Weather’s management, I’m only sales’.

Sales or not, he made an excellent tour guide, pointing out among other things, signs of Saxon herringbone masonry possibly dating from about 1050 AD and in the entrance the superb late Norman arched door opening with dog-tooth decoration and a Greek key-pattern design. See photograph.

Medieval glass survives in the south window of the bell tower and four magnificent dragons, one at each corner of the tower, support the heavy groins of the vault above. 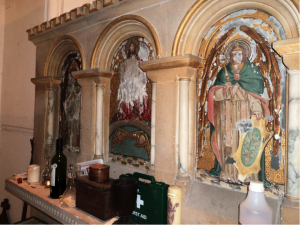 The chancel has been divided into two by a reredos to create a small vestry under the east
window but Reverend Brown unlocked the door into the vestry so that we could see the original altar with its painted panels. See photograph.

After the visit we sheltered in the porch until the rain had eased and then set off to explore the earthworks on Flagstaff Hill. We walked up the hollow way that is Flagstaff Road noting the house platforms, then out onto the hillside itself where early trackways were followed and field systems explored. The medieval ridge and furrow on the top of the hill was located and lynchets found on the north side of the hill that preserve early strip fields that may date from the Iron Age.

Detailed examination of the many house platforms and trackways was curtailed by the arrival of a new wave of rain and a hasty retreat was beaten leaving people to comment that a return would be welcomed but in better weather.

In the south wall there is a small window of medieval Somerset glass.  The eagle and book depicted there is the emblem of St John the Baptist.

Joseph Bell (1810-1895) founded his studio in the 1840’s and it continued to be run by his son (Frederick Henry Bell 1847-1899) and grandson (Frederick George 1878-1967) until 1923. Each generation was involved in the design and painting of the glass, with additional artists brought in to design and make commissions.  Joseph Bell & Son was later sold to Arnold Robinson, who had already undertaken commissions for the firm. After his death in 1955, Basil Barber, who had previously worked as chief cartoonist for Ninian Comper and had joined the studio in 1953, ran the firm until Geoffrey Robinson, son of Arnold Robinson, took over the firm in 1959. The studio closed after Geoffrey Robinson’s retirement in 1996.

One thought on “Christon Church”